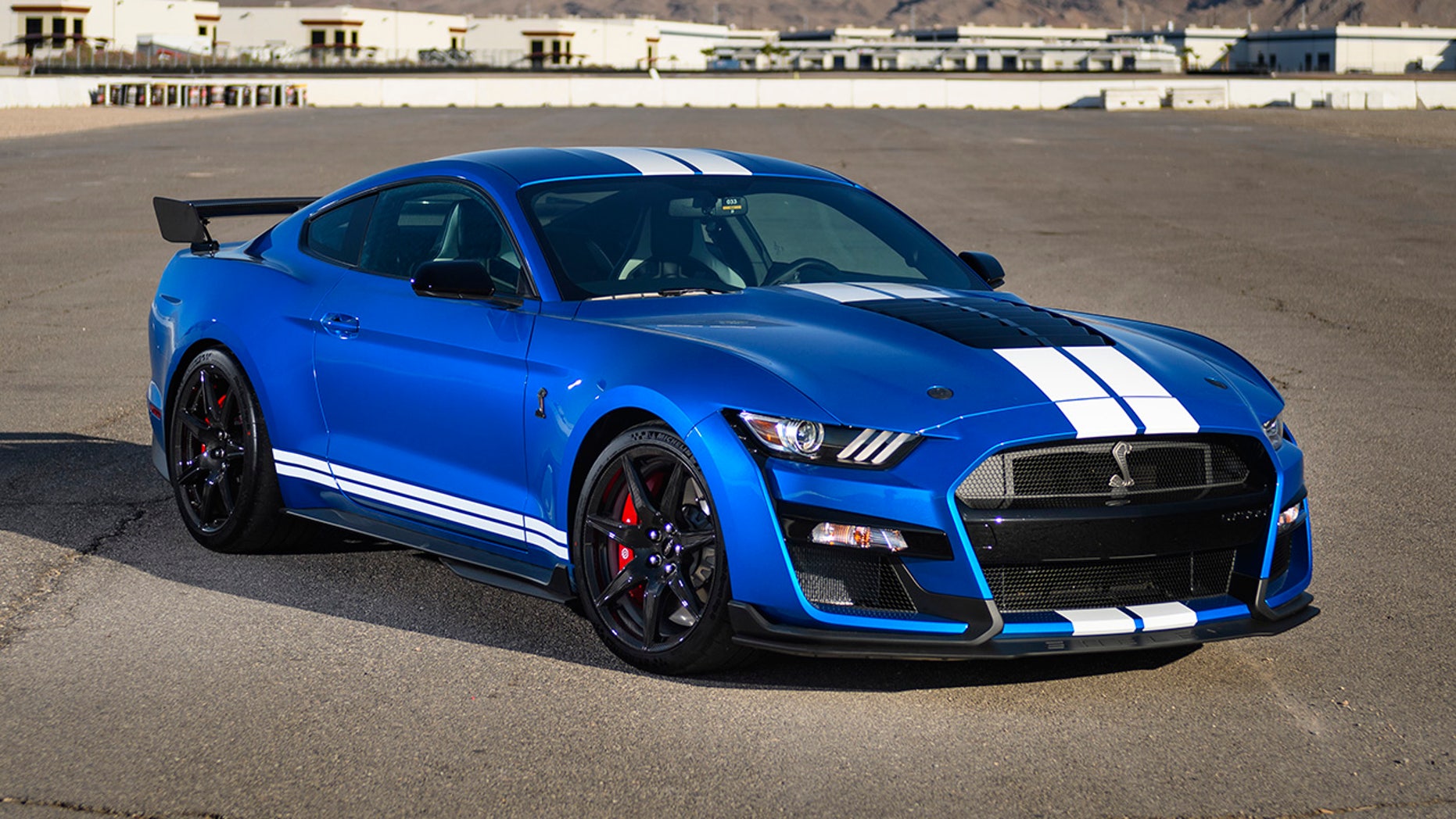 Needless to say, it takes approximately 10 seconds of driving it on a racetrack to nearly forget you’re in a Mustang.

Not a drag strip, but a twisty road course. In this instance, the one outside of the Las Vegas Motor Speedway’s NASCAR oval, where Ford debuted the all-new GT500. The way it accelerates, turns and stops is effortless for a car that has traditionally been a burly bruiser.

That’s what GT500s used to be, going back to the 1967 original. Even the latest 2013-2014 edition made you feel like Wile E. Coyote with a rocket strapped to the roof. With a 760 hp supercharged 5.2L V8 nicknamed the Predator, the new GT500 has more power than any other model before it, but harnesses with technology that seems alien to the Mustang. 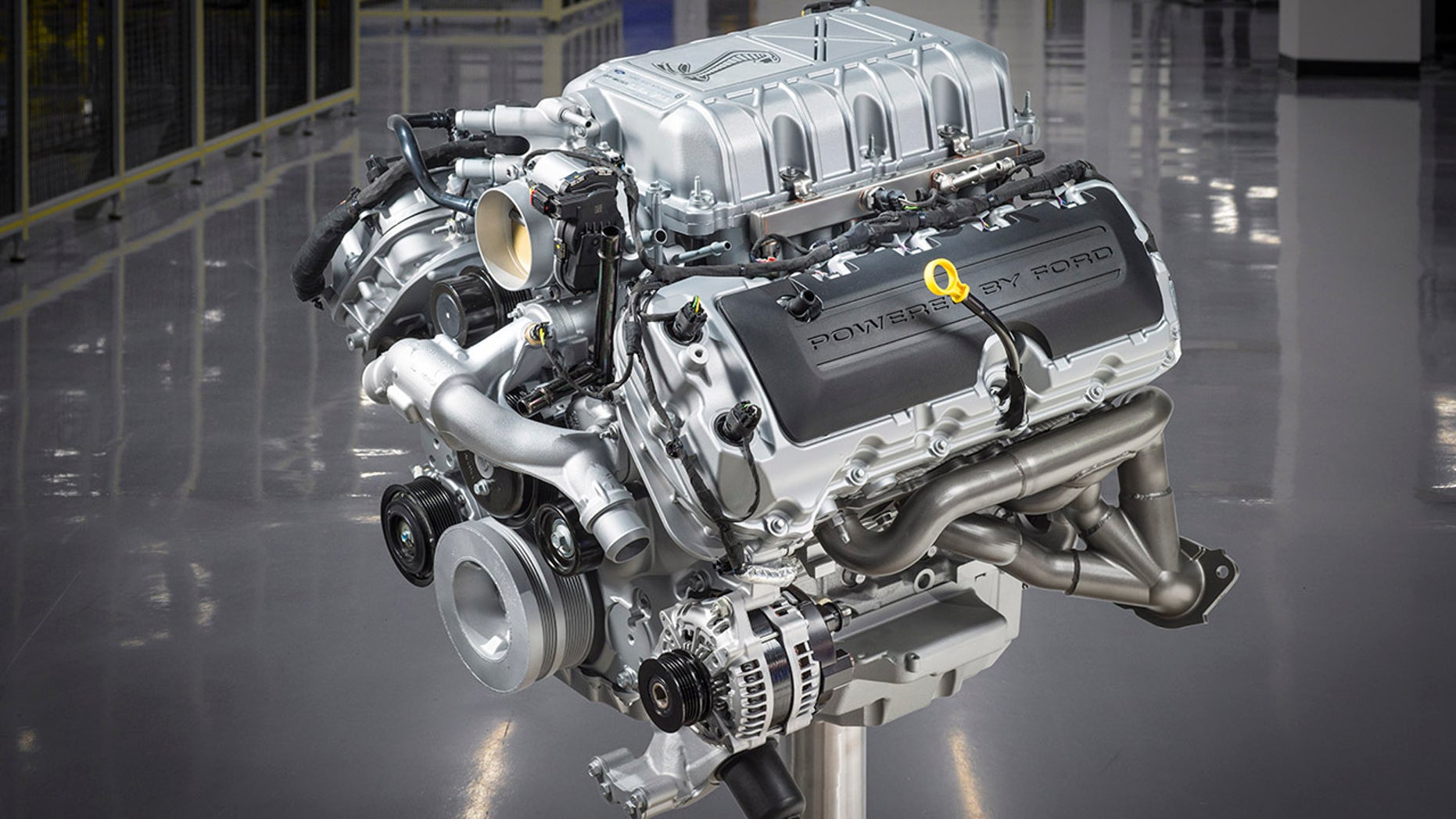 At a starting price of $73,995, the GT500 comes with foot-wide Michelin Pilot Cup Sport 4S tires, computer-controlled MagneRide shock absorbers that can adjust their stiffness 1,000 times per second and a seven-speed dual-clutch transmission that changes gears in eight-hundredths of one. Some will no doubt complain about the lack of a stick-shift, but Ford doesn’t have one strong enough to handle the engine’s 625 lb-ft of torque and also wanted the GT500’s performance to be as accessible as possible.

The GT500 is capable of accelerating to 60 mph in 3.3 seconds and covering a quarter-mile in 10.7 seconds, according to Ford. Both figures are .1 seconds faster than its rival, the bigger, heavier 797 hp Dodge Challenger SRT Hellcat Redeye can manage. It keeps the Mustang’s line-lock feature that grips the car in place as you do a burnout to warm up the tires and a launch control system that makes it easy to get going and send the engine screaming to its 7,500 rpm redline between shifts. 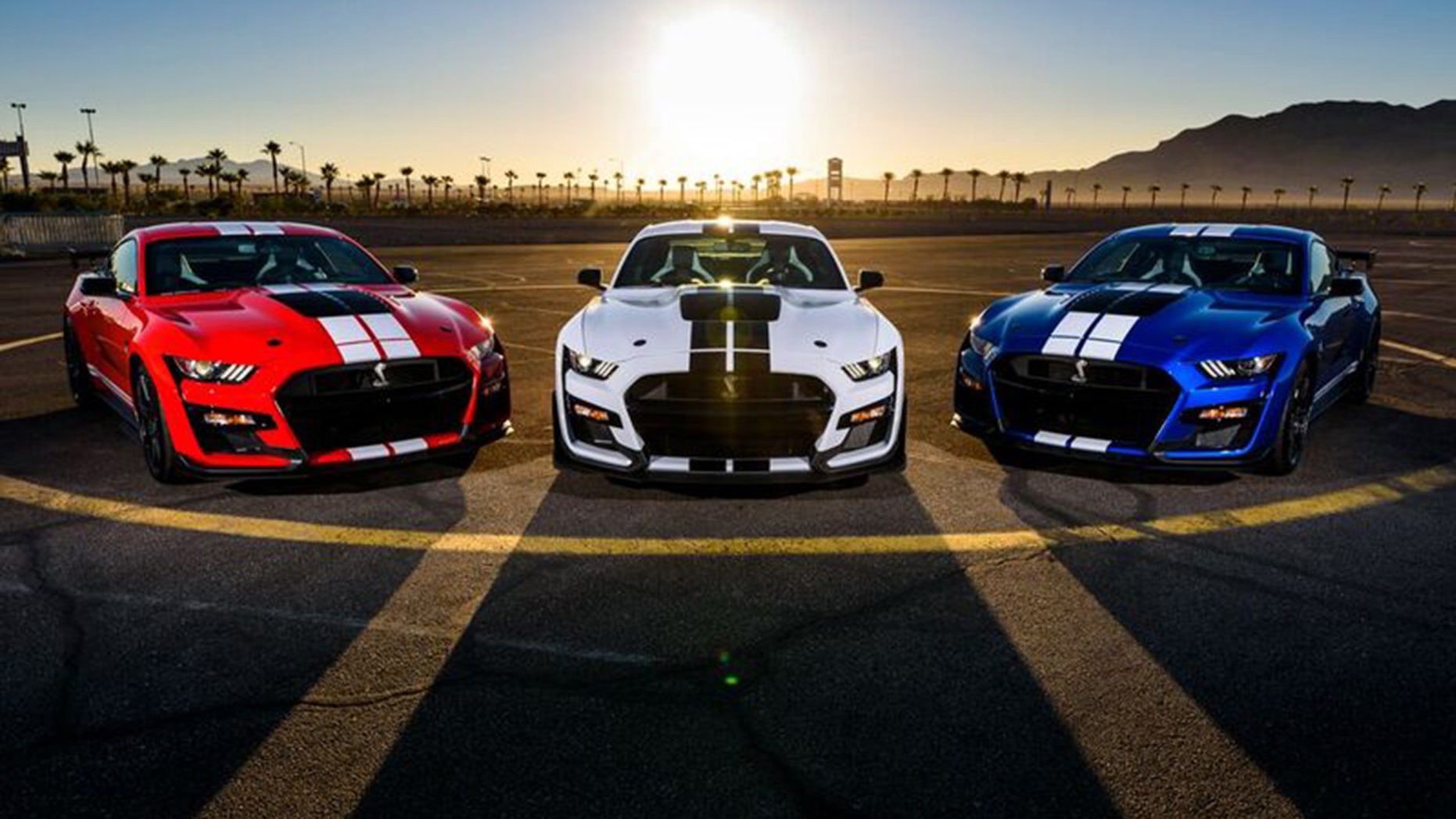 This kind of straight-line performance is great and all that, but the reality is how the GT500 handles the turns. The car has more vents in it than you can imagine, but they’re not just for cooling its monster motor and brakes. They also send air through the body to reduce lift at speed. A $1500 handling pack adds a set of aerodynamic whiskers to the front corners of the car and a Gurney flap on top of the rear spoiler to turn more of the air passing by them into downforce, while an $18,500 Carbon Fiber Track Pack speeds up the effect. 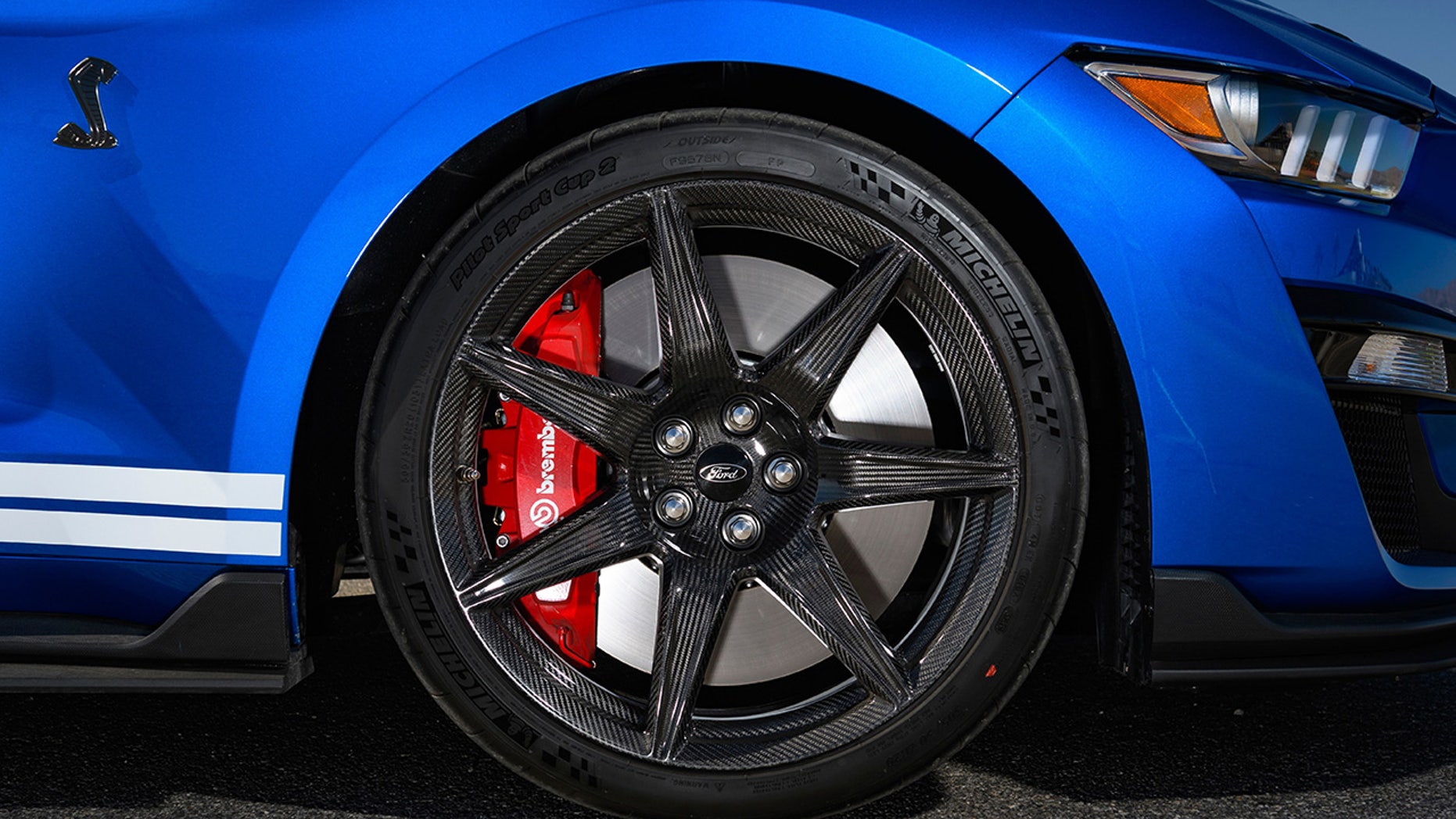 It completely changes out the rear spoiler for a giant wing designed after the one on the Ford Mustang GT4 racing car that helps the GT500 generate 550 pounds of downforce at its restricted 180 mph top speed. Summer-only Pilot Cup Sport 2 tires on lightweight carbon fiber wheels, deep Recaro front buckets and a rear seat omit that turns the GT500 into a two-passenger coupe are also included.

With all the arsenal in place, the GT500 goes around curves as if you were hanging on to dear life. The grip and poise are astounding. The faster you drive, the smaller and more adept it feels. You find yourself ambushing long sweepers and esses without a second thought, the way you would in something that started its life as a high-end sports car, not a $28,000 Mustang. When it does reach the limit, it leaves lots of room for error as you reel it back in. 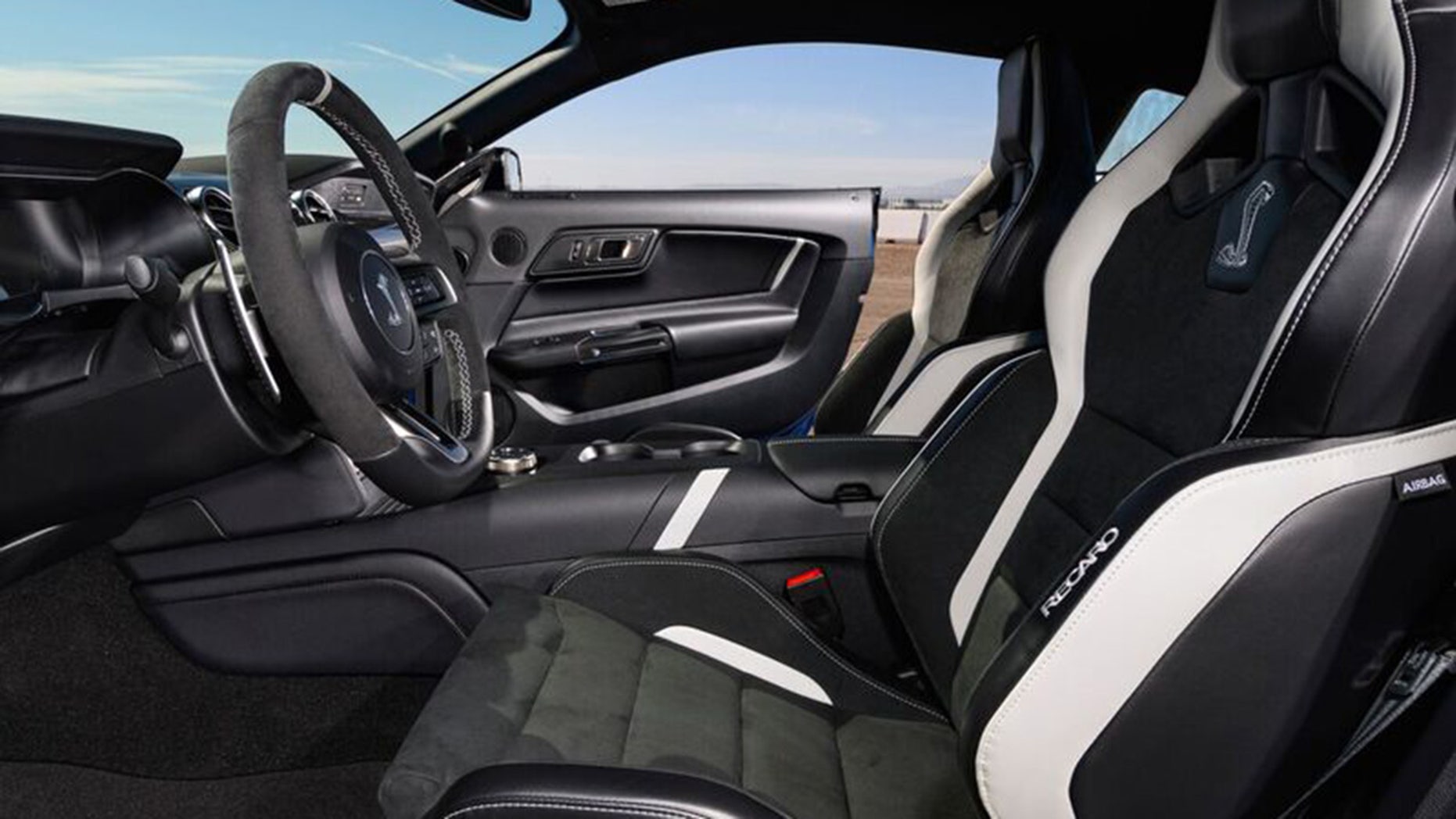 Much of the credit goes to an advanced traction and stability management system that allows you to put your foot down to the accelerator with much abandon and figures out how much power you really need in any situation. It was never shut off, because the driver was one engineers were looking to keep safe when they programmed it, but the ones he spoke with said it’s faster if you don’t, anyway.

While many owners will without a doubt tow their GT500s to the track with an F-Series Ford truck, Ford is happy to sell them on the side, I don’t think they’d mind driving it there much at all. The tires add some noise, but there isn’t any annoying sounds to deal with and the firm ride is perfectly acceptable on the road.

That being said, plan on making a few extra stops for gas. The GT500’s fuel economy is a pretty bad at 12 mpg city and 18 mpg highway, while the Challenger SRT Hellcat Redeye gets 13 mpg and 22 mpg, the latter thanks to a higher top gear ratio.

But there’s a different kind of fluid you can get as an option that will make your gas bill look cheap. Along with the stock $1,000 decals, Ford is offering a limited number of GT500s with hand-painted racing stripes for $10,000. The car won’t go any faster, but they may be worth it in the long-term in gold if you send it across the auction block someday.

I’m sure you’ll always remember it vividly if you do, so go buy a 2020 Ford Mustang Shelby GT500 today!